It’s been a while since I’ve posted, and I feel I owe you an apology as well as a short explanation. At least I’ll try to keep it short.

The last few…errr… six months have been life-changing to say the least. On New Years Eve I toasted friends and we said “good riddance” to 2012, as it was a rough year for many of us. As I entered 2013 I told myself, “If I can just make it through January, I know I’ll be okay.” I had no idea at that point that the month and the year ahead would hold so many wonderful things for me.

In August of 2012 we made a quick decision to sell our condo after realizing we needed to get out of the neighborhood we were in and we had a small window of time in which to do so. In November we closed on our new house in the suburbs, which was quite a change for both of us. Meanwhile I had been job searching, trying to escape an abusive workplace. In January of 2013, I finally got not just an opportunity to leave the place that was killing me inside, but an opportunity at one of the most amazing, most successful and fastest growing companies in the industry. I feel extremely lucky and blessed to be where I am today. But that wasn’t the only career change I was making.

After teaching a boot camp class, I was approached by a Trainer for Camp Gladiator about potentially training for them. Not thinking much of it, I agreed to go to an informational session to hear what it was all about. I went in fairly certain I had too much on my plate to take on anything else at the moment. I think it was about 30 minutes in and I was already sold. So began a 4 month process of auditions and internships to become the Primary Trainer I am so proud to say I am today.

So I now essentially have two new full-time jobs, a new house in the ‘burbs, but that’s not all. That’s right, shortly after I began my new full-time job and started interning with CG, I found out we were expecting a baby! We were very excited and also very surprised. Especially considering it wasn’t but a few short months ago that my OB-GYN had told us we would likely have a very difficult time conceiving without medical intervention. He’s since been “let go” as my Doctor. 🙂 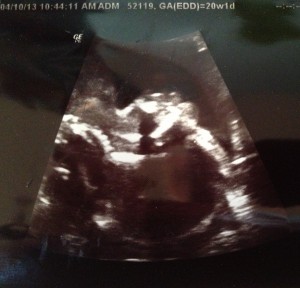 So there you have it—the short version of where I’ve been hiding for the past few months. I have so many pregnancy-related posts that I’ve wanted to post, but felt like I couldn’t without first breaking the news! Since the start of 2013 (and pretty much in the month of January alone), I have an entirely new life. I’m laughing now because last summer I sat at lunch with a friend of mine, and told her in tears “job, house or baby, I don’t care what, but something had to change.” She told me to be careful what I wished for or it would all happen at once. I replied with a snarky “well if that’s what has to happen then that’s fine, I can handle it.” I guess this is me… “handling it.” I thank God every day for answering my prayers.

Our bundle of joy is expected to arrive on August 27, 2013. More pregnancy- and parenting-related posts coming soon!